Insights from f-cell 2019 in Stuttgart 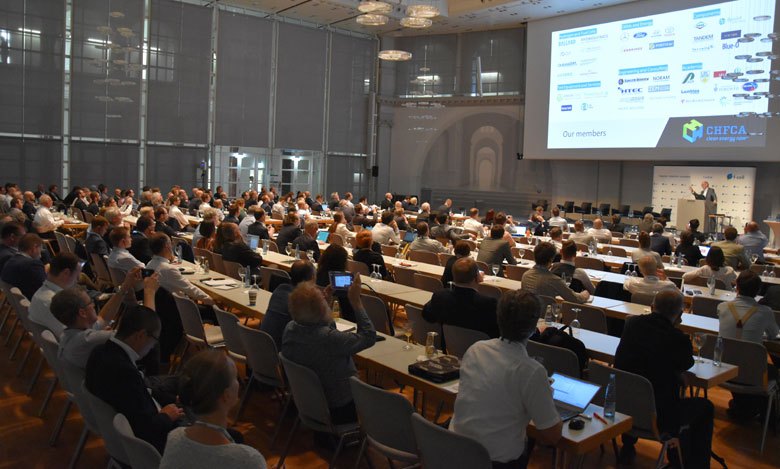 A mere two days after our return from H2WORLD 2019 in Changwon, we packed our bags for Germany to host the Canada Pavilion at the 19th f-cell Impulse Summit and Trade Fair in Stuttgart.  The annual event is organized by our good friends and colleagues at Peter Sauber Agentur who will be helping us to organize our joint f-cell + HFC 2020 conference and trade fair in Vancouver in April.

It seemed like the perfect time for such an event to be held in Germany. Earlier in August, Chancellor Angela Merkel announced a national hydrogen strategy for aviation, while the German Government is also expected to decide on a hydrogen strategy by the end of 2019.

The excitement surely manifested in the conference.  More than 500 hydrogen and fuel cell experts from 21 countries and four continents descended upon Stuttgart to make Baden-Württemberg’s largest city a centre for the H2+FC community for two days.

In addition to participation in the conference speaking program, we made our presence known in the trade fair by hosting the largest booth and only country pavilion on display.  Joining us at the Canada Pavilion in the trade fair were members Ballard Power Systems, Hydrogenics, Blue-O Technology and Greenlight Innovation who enjoyed great meetings with conference participants and made some valuable contacts. With the support of Global Affairs Canada’s Trade Commissioner Service, we also hosted a Topic Table on Canadian Hydrogen Solutions for Public Road and Rail Transportation.  The trade fair audience was very engaged and enjoyed listening to talks from CHFCA President & CEO Mark Kirby, Oben Uluc (Ballard Power Systems) and Mark Kammerer (Hydrogenics).

One of the highlights of the conference programme was the international market overviews, where we learned about current projects and investment programmes in countries like USA, Japan, Germany, and France.

However, it was particularly interesting to learn about some newer players such as Australia and Chile who have both announced large funding programs or ambitious targets towards zero emissions.

Oh, did I mention that there was a 24-hour hydrogen rally?

For the first time, a 24 Hour Hydrogen Challenge took place in parallel with the f-cell event. A strategic game for fuel cell electric vehicles (FCEVs), teams chose their own routes through Germany to collect as many points as possible.  The finish line for the challenge was at the f-cell evening event, and a total of four rally winners were recognized for reaching the finish line.

Not a bad way to kick off the evening reception where CHFCA and our members enjoyed a night of great food and networking!