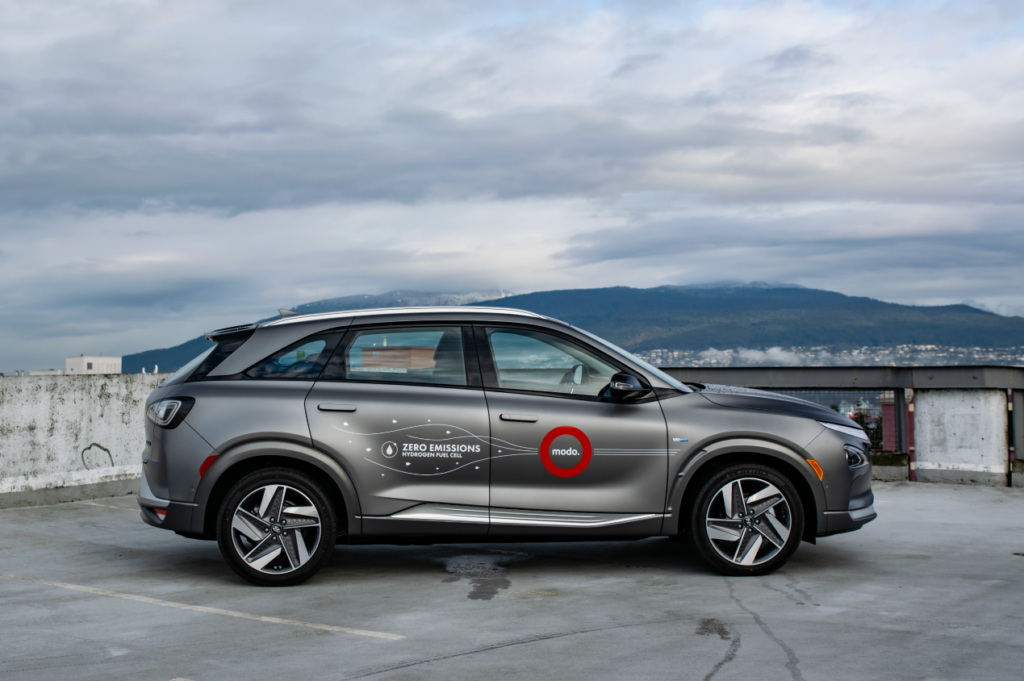 VANCOUVER, BRITISH COLUMBIA (March 19, 2020) – A new survey of British Columbia (BC) carshare users who booked the Hyundai NEXO fuel cell electric vehicle (FCEV) in recent months found that most had a positive experience driving the NEXO, with 93% of respondents indicating curiosity drove their decision to book the zero-emission vehicle, and 68% reporting they made the decision because of the NEXO’s environmental footprint.

The survey undertaken by Modo (in collaboration with the Canadian Hydrogen and Fuel Cell Association and Hyundai Auto Canada) collected responses from members of the BC-based carshare co-operative who added the Hyundai NEXO to its diverse fleet of over 700 vehicles in March 2019.

The Modo survey showed strong awareness of fuel cell electric vehicles, with nearly all (92%) of the respondents indicating they were aware of the option.  Since being placed into service, Modo’s NEXO vehicles have been booked 260 times by 196 members and driven a total of 10,328 kilometres, all 100% emissions free.

“We are excited to be the first carshare to offer consumers the opportunity to experience a hydrogen fuel cell vehicle for themselves,” says Patrick Nangle, CEO of Modo. “Supporting a cleaner BC aligns with Modo’s social and environmental purpose as a member-owned co-operative. We are grateful to Hyundai Canada and the Canadian Hydrogen and Fuel Cell Association for their financial contribution in making this possible.”

Modo continues to see month-over-month increases in bookings.  Drivers have praised the vehicle as being both environmentally friendly and technically innovative, while not compromising ride quality or interior comfort. The NEXO can refill in just five minutes and offers drivers a driving range of 570 kilometres, something Modo member Kristi Fuoco cites as being an important factor: “The technology is impressive. It’s fun, powerful and easy to drive, and refueling is so quick. I can’t wait to drive it again!”

And this member isn’t the only one: 96% of people who drove the vehicle reported their overall experience as good or great.

“Modo’s carsharing model is such a great way to have a large amount of people experience new technology, so it’s perfect for the NEXO,” said Don Romano, President and CEO of Hyundai Auto Canada. “We are demystifying the Hydrogen Fuel Cell vehicle, one person at a time. It’s important for us to make innovative, green technologies readily available for Canadians, accelerating education and ensuring a sustainable future.”

As the demand for zero emission FCEVs such as the Hyundai NEXO continues to rise, drivers are expressing their desire to see the development of infrastructure to support vehicle rollouts, with 82% of survey respondents calling for increased government investment in more fuelling stations and subsidies to purchase FCEVs. Survey respondents also indicated a desire for more stations to be added along BC highways to accommodate trips to the Interior and across the border into the United States.

The Canadian Hydrogen and Fuel Cell Association (CHFCA), a non-profit industry association comprising industry, government, academia, and research stakeholders, has worked with the Government of British Columbia to secure funding for the installation of hydrogen refuelling stations in the province as well as to support the NEXO deployment in Modo’s car fleet.

“BC drivers want clean, low-cost hydrogen so they can choose to drive cars like the NEXO,” says Mark Kirby, President and CEO of the CHFCA, “and the CHFCA is working with governments and industry to ensure the public has access to a growing network of stations. But it is not just for the public. Trucking companies, transit agencies, ferry corporations, gas utilities, mines and other industries are huge users of fuel and clean, low-cost, hydrogen is essential for them to become carbon neutral. Modo drivers are leading the way!”

With the support of the BC Government and CHFCA, Canada’s first retail hydrogen refuelling station opened in Vancouver in 2018, as part of a multi-station network being developed by BC-based HTEC Hydrogen Technology & Energy Corporation (HTEC) to support the rollout of the first thousand FCEVs onto the province’s roads. HTEC has since opened two more stations, in Burnaby and North Vancouver; a fourth station is under construction in Victoria; and others are planned for Vancouver and in the Central Interior.

“HTEC is excited to be building the fueling infrastructure required to make hydrogen vehicles a practical and feasible zero-emission choice for consumers,” says Colin Armstrong, HTEC’s CEO. “We are encouraged to hear a lot of positive feedback from Modo drivers who stopped at a station to fill up the Nexo – It’s great when people see for themselves that it’s as safe, quick, and convenient to fill up with hydrogen as gasoline.”

The NEXO is only available for booking through Modo. For more information and to receive a trial offer, please visit https://modo.coop/nexo

Modo opened its doors in 1997, as the first and only carshare co-operative in BC. With a focus on people, not profits, Modo’s purpose is to transform communities by connecting people with places in a way that’s affordable, convenient, inclusive and sustainable. Today, Modo serves more than 22,000 members across the Lower Mainland, Vancouver Island, the Okanagan and Squamish; with access to 700 cars, trucks, SUVs, vans and more. Rates start at just $4 per hour, with gas and insurance included. More at modo.coop

The Canadian Hydrogen and Fuel Cell Association (CHFCA) is a national, non-profit industry association comprising industry, academia, government agencies, financial organizations and other stakeholders. The CHFCA is focused on promoting Canada’s world-leading hydrogen and fuel cell sector and accelerating the adoption of its members’ products and services to help tackle the world’s most critical energy challenges.

HTEC is unlocking hydrogen’s potential to reduce urban air pollution and the impacts of climate change by designing and building hydrogen fuel supply solutions to support the deployment of hydrogen fuel cell electric vehicles. Partnering with government, industrial gas companies, key equipment suppliers, automotive and energy companies, HTEC is delivering safe, reliable, and sustainable low-cost hydrogen to customers and consumers, whenever and wherever they need it. Learn more at www.htec.ca. HTEC: Fueling the Drive to Hydrogen.