Hydrogen – A New Era of Energy

Hydrogen is a sustainable and clean “energy carrier” that, when consumed in a fuel cell, produces only water, electricity, and heat.

As the most abundant element in our universe, and the simplest element – with only one proton and one electron – hydrogen has no harmful carbon atoms and offers 2-3 times more energy than any fuel in use today. 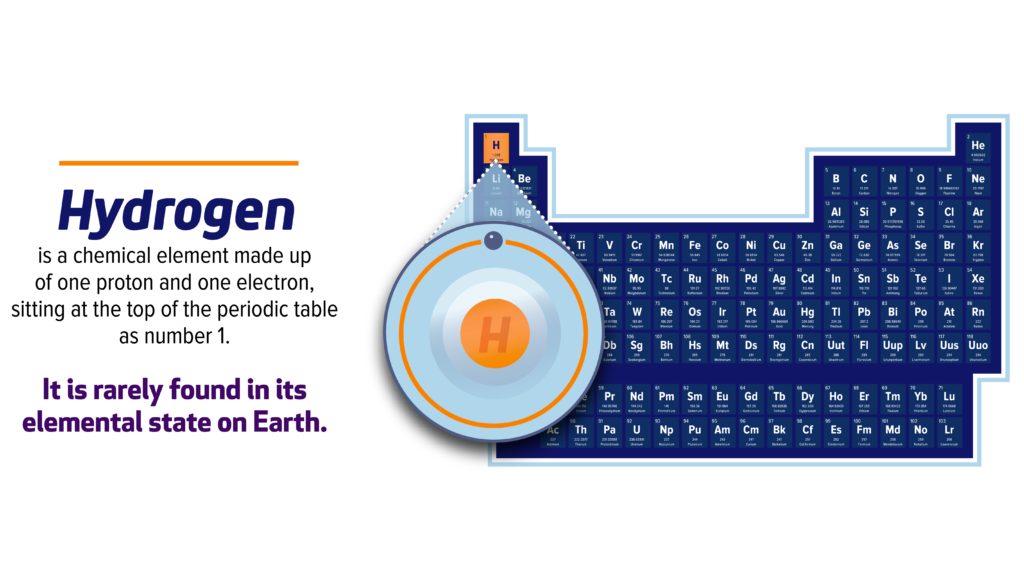 Hydrogen has been used for years for industrial processing of ammonia for fertilizers, refining of petroleum products, or decarbonizing our natural gas grids, but its greatest benefits will be decarbonizing our energy economies as a ubiquitous fuel for vehicles, buildings, ships, trains or for back-up of critical applications such as cellular towers.

Industry already uses about 55 million tonnes of hydrogen a year as a feedstock, and hydrogen is itself produced as a by-product of industrial processes. The role of renewable power for producing hydrogen is also expanding with the decrease in costs of wind and solar energies.

To support its growing use worldwide, the infrastructure for distributing hydrogen is evolving. In many regions, hydrogen fueling stations are being built to support the roll-out of fuel cell automobiles as well as at industrial operating centres for transit buses, heavy-duty trucks or material handling fleets. To reach these stations, the fuel can be distributed via ship, pipelines, liquified tanker-trucks or high-pressure tube trailers similar to natural gas.

Hydrogen has been safely produced, stored, transported, and used in large amounts in industry fpr years. In fact, hydrogen’s unique characteristics make it one of the safest energy sources when compared to flammable fuels, such as gasoline, diesel or natural gas. 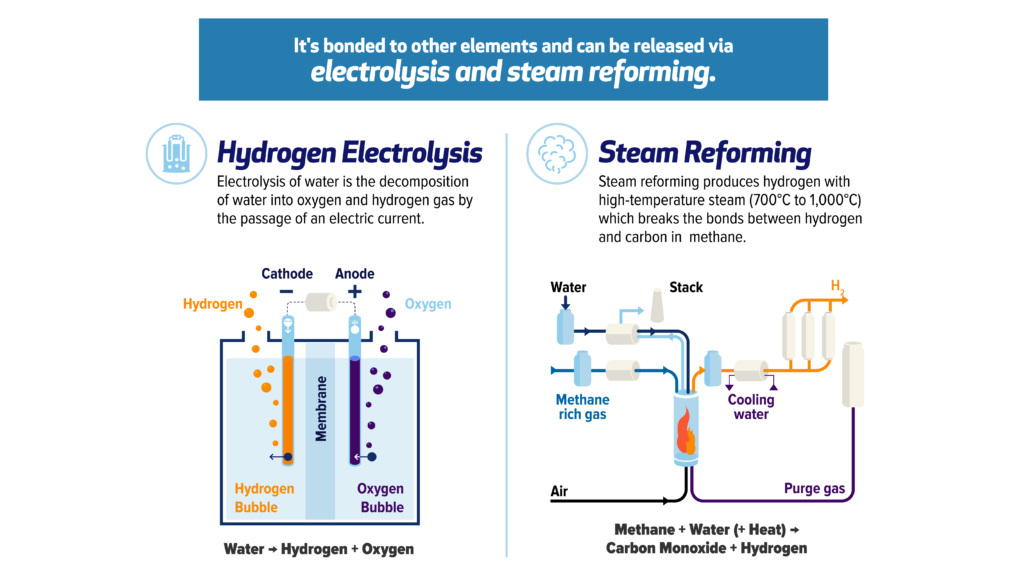 Hydrogen is non-toxic, and because it is much lighter than air, it will dissipate quickly should a leak occur. However, all fuels should be treated with respect, and hydrogen is no different. To ensure that hydrogen is handled responsibly, the International Organization for Standardization (ISO) has developed international safety standards, while the Canadian Hydrogen Installation Code (CHIC) defines the requirements applicable to the installation of hydrogen equipment.

Hydrogen can store and deliver energy, but it doesn’t exist by itself in nature. Yet it can be produced from diverse, domestic resources that contain it, such as natural gas or coal (using carbon sequestration), or from renewable sources like nuclear, biomass, wind, solar or hydro-electric power using a range of processes.

Currently, most industrial hydrogen is produced from steam methane reforming (SMR) where the methane from natural gas is heated with steam and a catalyst, to produce a mixture of carbon monoxide and “brown” hydrogen. While this is the most cost-efficient technology to produce hydrogen today, the process does produce carbon emissions which can be captured and stored (CCS) or reused as chemical building blocks, thus turning it into “blue” hydrogen.

Hydrogen can also be made using electricity from the grid or via renewables to electrolyze water. With the cost of renewables falling dramatically, hydrogen production using electrolysis offers a path to produce “green” hydrogen at prices competitive to that produced from the reforming of fossil fuels. With electrolysis, you split constituents of water into hydrogen and oxygen, which is basically a fuel cell in reverse. A low-voltage electrical current is run through the water, where oxygen forms at the anode and hydrogen at the cathode.

Hydrogen is proving itself as an indispensable fuel to enable renewable energy to power our plant. But the question of how to store and move it is growing in importance.

Hydrogen’s low density means it must be stored at pressure, either as a gas, liquid, or on the surfaces of or in solids.

In a vehicle, most hydrogen is stored in a gaseous state using one or multiple tanks to meet the desired vehicle range. When stored as a gas, high-pressure tanks are used ranging from 5,000 to 10,000 psi (or 300-500 bar).

For storing or transporting hydrogen, the fuel is usually stored as a liquid in cryogenic tanks. To maintain liquidity, the hydrogen is stored at a temperature below negative 253 degrees Celsius. To maintain that temperature, the unit – whether it be a transport truck or fueling station – must include a freezer system.

For light-duty vehicles, high-pressure composite tanks are used with storage capacities ranging from 5-13 kg of hydrogen to meet the driving ranges required. Freight trucks and buses also typically use high-density compressed gaseous tanks, with multiple tanks to support the added weight, performance demands. Higher pressure and higher density tanks are under development to enable longer driving ranges. All transport hydrogen systems have the requisite fuel management and pressure control equipment needed for fueling the vehicle and delivering hydrogen at a specified pressure to the fuel cell.

To store a higher concentration of hydrogen more compactly, scientists are developing solid state hydrogen storage in metal hydrides and nanomaterials that can either physically absorb the gas or chemically combine with it. This developing science requires further testing and validation under actual operating conditions.

Hydrogen power-to-gas (P2G) offers an additional opportunity to utilize excess or intermittent renewable energies that would otherwise be wasted, and store that surplus energy for later use. The hydrogen could be injected into the natural gas grid or transported when and where it is needed.

A supportive hydrogen infrastructure for fuel cell vehicles is being developed in regions where governments, vehicle manufacturers and hydrogen suppliers are working together to strengthen fuel cell vehicle deployment.

Today, the infrastructure is limited as the cost to produce and deliver the fuel is high as demand is not sufficient to bring costs down. At the same time, automotive fuel cell developers struggle to get production volumes up to create economies to scale to bring costs down, without the supportive infrastructure. Chicken or egg – which comes first.

Industry leaders project that a hydrogen infrastructure will be built using a “cluster approach”, locating stations in a limited geographical area and then connecting the clusters via major thoroughfares.

As more vehicles arrive, more economical, higher capacity stations will be sited. Until that time, it is projected in most regions that initial stations will remain publicly funded until fuel cell vehicle volumes expand and there is a clear business case for private investment.

Initially, most hydrogen fueling stations will be located at existing gasoline station sites, with hydrogen dispenser sited adjacent to their gasoline counterparts.

Customers will have a similar experience refueling their hydrogen fuel cell vehicle, in terms of duration, but the nozzle and hose are different. Because the fuel is gaseous, the nozzle will form an airtight connection with the on-board fuel tank and it will feel cool to the touch. The dispenser may also have nozzles with two different pressures – 35 and 70 MPa – depending on vehicle range.